More than one million people infected with coronavirus across the world have now recovered, according to figures.

Data compiled by Johns Hopkins University – which has tracked the pandemic since it began – shows the milestone was hit last night.

More than 3million people have been infected with the virus worldwide, and around 230,000 people have died – meaning there have now been around four times more recoveries than deaths.

However, the true number of infected patients who have recovered could potentially be millions more because the true size of the pandemic remains a mystery.

Dozens of countries around the world, including the UK, are clueless as to how many people have really been infected because of a lack of testing.

The UK does not even keep a daily track of how many patients have recovered from COVID-19.

For example, the most recent toll given by officials for how many infected Brits have recovered is just 859 out of 171,253 cases.

Britain’s lack of data suggests that only around 0.5 percent of patients recover – but that is wildly inaccurate.

Germany, praised for its robust testing regime, has a recovery rate of around 75 percent, according to the Johns Hopkins website.

Spain’s recovery rate is around 52 percent, while it is closer to 36 percent in Italy and 30 percent in France.

Using these percentages, it would suggest that between 50,000 and 130,000 Brits have really recovered. 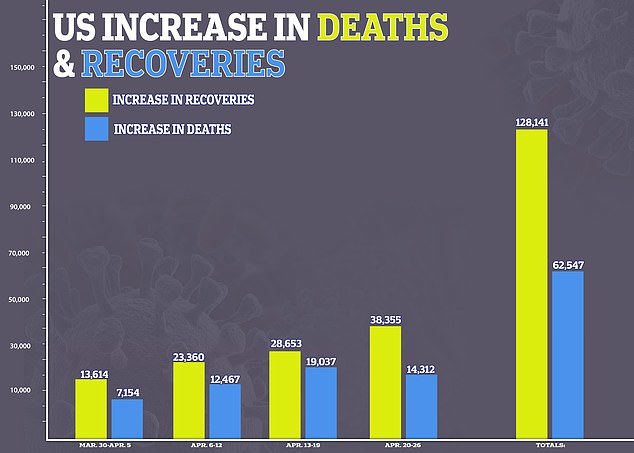 Of the 1.07 million people in the US who have been diagnosed with coronavirus, at least 128,141 are confirmed to have recovered – double the number of Americans who’ve died, which is 62,547 (above) 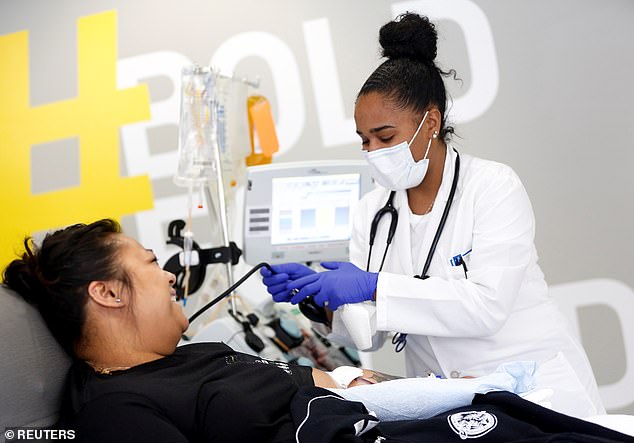 To be considered recovered, patients must have no fever for 72 hours without drugs, and two negative tests results taken at least 24 hours apart. Pictured: Phlebotomist Jenee Wilson talks with Melissa Cruz, an ER technician who has recovered from coronavirus, as she finishes donating plasma in Seattle, Washington, April 17 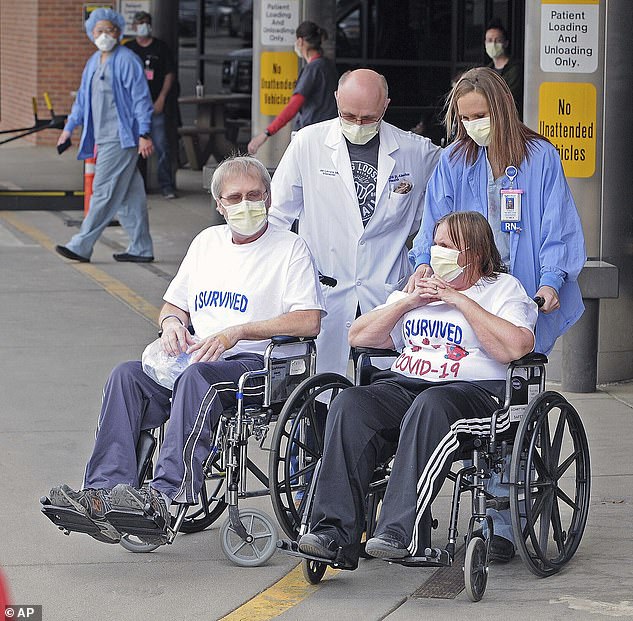 Researchers believe the number of recoveries is likely higher due to the number of people with antibodies who never tested positive for the virus. Pictured: Dr. Jan Levora (left) and nurse Kristen Renner (right) wait outside CHI-St Alexius Health in Bismarck, North Dakota, with Gery (left) and Betty DeGreef of Mandan, both of whom recovered from the virus

But because estimates of the outbreak suggest millions of Brits have actually been infected, the true number could well be a seven-figure number.

It comes after it was revealed yesterday that recoveries from the coronavirus in the US are now double the number of total deaths.

It offers hope for the US, which reports five-figure numbers when it comes to new cases per day – five times as many as China did during its peak.

To be considered recovered, a patient must have no fever without the help of drugs for 72 hours, according to the Centers for Disease Control and Prevention.

Additionally, the person must also show improvement in his or her respiratory health and have two negative test results taken at least 24 hours apart.

The current numbers are a far cry from the week of March 16 to 22 when 472 people died and 668 had recovered, only about a 41 percent difference.

But while deaths are increasing exponentially week over week, recoveries are rising at a faster rate.

Hundreds of protesters, some carrying guns in the state Capitol, demonstrate against Michigan’s emergency measures